Fans Have Their Say On The Super Bowl 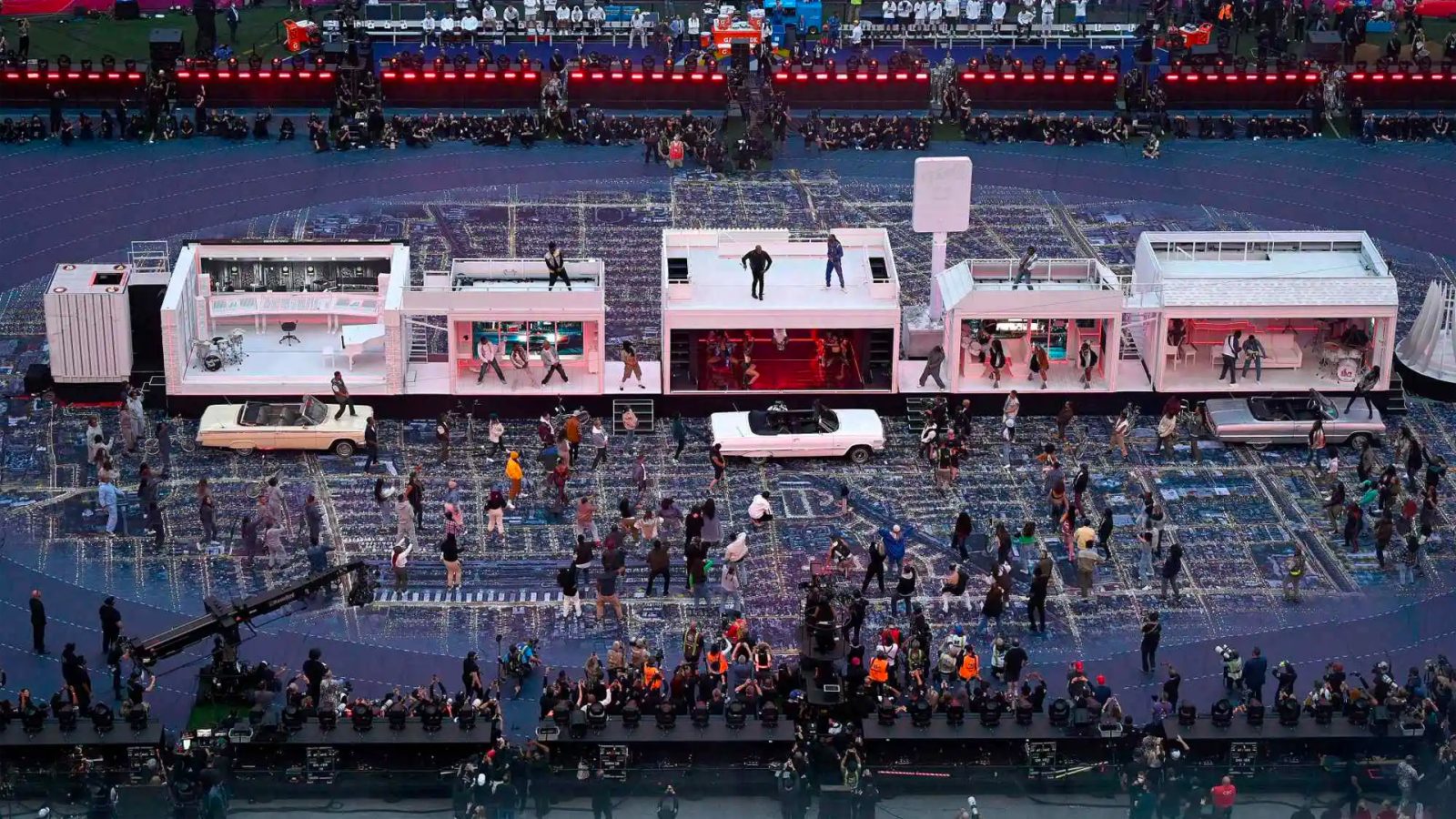 The Super Bowl isn't just one of the biggest sporting events on the calendar; it's one of the biggest marketing events too. For some, the Halftime Show is the biggest draw. Headliners this year were hip hop themed, a spotlight moment for the last three decades of hip hop, with Dr Dre, Snoop Dog, Eminem, Mary J Blige and Kendrick Lemar taking to the stage in SoFi Stadium.

Thanks to our Fan Intelligence Network, we were able to track how global fans were reacting to the Super Bowl in real-time, with real-time reactions to this year’s Pepsi Super Bowl LVI Halftime Show.

It's rumoured to be the final year that Pepsi are sponsoring the Halftime Show, which last year rocketed the brand to 13th place in the Fan Intelligence® Index - our industry-first ranking of culturally relevant brands in sport. But how did they perform this time around?

With Dr Dre, Snoop Dog, Eminem and MJB all due to perform, Pepsi seemed to be going out with a bang.

“Eminem still has fans across the globe, Dre and Mary are still loved and respected as icons, Snoop is still constantly going viral.” - Patrick P, USA.

“These acts will forever be relevant in music. They are the foundation of hip hop.” Patrick J, UK.

It wasn't just the hip-hop icons in the spotlight, as Kendrick Lemar completed the lineup, cementing his own status as a titan of the genre.

“They all influenced the music of today. They’re pillars of American music in their own rights.” Jamil, UK.

Fans also loved the homecoming angle of the talent choices too, with three decades of California hip hop represented in Inglewood, CA. Fans thought it fitting to celebrate locals Dre, Snoop, and Kendrick, on a global stage.

“Kendrick Lamar and Snoop Dogg are perfect for a game on the west coast!” Sekou, USA.

“There’s no one I’d rather see than Snoop Dogg when the Super Bowl is in California” Kaelin, UK.

The NFL hides in the NBA’s shadow

For some fans, NBA proves an inspiration for the NFL as they flagged the authenticity of the homecoming. The NBA always get a hometown artist to perform at their All-Star Weekend - this year, it's the turn of Cleveland native Machine Gun Kelly.

The NFL obviously took cues from the NBA, but fans felt they could've gone further. Some were quick to point out that basketball is more progressive and more permissive in the views it allows to be shared.

“Depending on the state, what the NBA does for All-star weekend is get a hometown artist to perform at a show which is great.” Amen, UK.

“The NBA has not shied away from allowing players to voice their concerns.” Jamil, UK.

While the NBA ranked 5th in last year's Index - higher than any other rights-holder - the NFL didn't even break the top 40. In short, the New Breed of Fan wants to see much more from the NFL if they're going to become culturally relevant.

Fans have a fractured relationship with the NFL. Compared to other major leagues worldwide, they say the NFL is guilty of making poor decisions. The league's handling of complex issues has left fans questioning their integrity.

“Black players drive a lot of American Sports. The recent strife with Kaepernick kneeling caused me to take a step away from watching football. Seun, UK.

“There is an issue with the off-field representation. The majority of players are black, but the folks in charge of the league are typically white.” Seun, UK.

“It’s insanely important to hold the NFL accountable. Black people move a lot of "culture" for these companies, so it's only right that they invest.” Sekou, 25, USA.

Many refer to Colin Kaepernick’s treatment as a tipping point. Kapernick was ostracised and ran out of the NFL for his stance on police brutality in America. Compared to other elite American leagues, the NFL is not seen as progressive enough to celebrate black athletes or empower them to drive social change. Some fans’ disdain for the NFL was so strong that 25% of them didn’t plan to watch the game, and 8% were only tuning in for the halftime show.

So how did the Fan Intelligence® Network react to the Super Bowl Halftime Show?

The Pepsi SuperBowl LVI Halftime Show saw the hip hop icons take their opportunity to get Lebron, Ye, JLo, and the rest of the world on their feet. Additional surprise appearances by 50 Cent and Anderson .Paak got fans even more hyped by the greatest show on earth.

Eminem got the Fan Intelligence® Network talking. He used his platform to drop to his knee in a powerful and meaningful stance against racial inequality.

“Always been a fan of football and hip-hop alike.  Appreciate the subtle —yet, upbeat message. Tonight feeling very grateful for hip-hop icons, especially Dre and Eminem, utilizing their platform to recognize us and what we are all going through.” 🙏 - Deb, USA.

“Nothing but respect.” - Sydney, USA.

“The best part of the Halftime Show.” - Lola, USA.

Kendrick Lemar also responded to fans' issues with the NFL by performing the BLM anthem “Alright”. The song serves as a rallying cry against police brutality in the USA by vocalising racist violence, injustice, and police brutality issues.

“The choreography, the vocals, the energy Kendrick puts in his performance.. anyone who still comes here to say his performance is mid or isn't good enough needs to be checked.” - Olumide, Nigeria.

“I had literally just sat down with some nachos, heard that beat and stood right tf up!!’ - Brea, USA.

Fans loved the fact it was on the biggest stage. However, they questioned whether the NFL censored his lyrics after Kendrick cut key lyrics.

“It really says something about the NFL that they censored Kendrick’s line about police brutality in Alright…” - Sofia, Mexico.

Did The Super Bowl Alter Perceptions Of The NFL?

Fans loved the Halftime Show. The eventual spotlight of hip hop was a long time coming, but the NFL still has significant issues to deal with.

Overall, it seems the NFL has a long way to win back fans' trust on social issues.

The Super Bowl once again provided many key insights into global fan sentiment for marketers. It's a fascinating moment in the sporting calendar, when sport, entertainment, music, trends, and culture come crashing together. It's the sort of event the Fan Intelligence® Network was built for, and by this time next year, things could look very different indeed.

Sign up here for the latest fan intelligence trends

We use cookies on our website to give you the most relevant experience by remembering your preferences and repeat visits. By clicking “Accept All”, you consent to the use of ALL the cookies. However, you may visit "Cookie Settings" to provide a controlled consent.
Cookie SettingsAccept All
Manage consent

This website uses cookies to improve your experience while you navigate through the website. Out of these, the cookies that are categorized as necessary are stored on your browser as they are essential for the working of basic functionalities of the website. We also use third-party cookies that help us analyze and understand how you use this website. These cookies will be stored in your browser only with your consent. You also have the option to opt-out of these cookies. But opting out of some of these cookies may affect your browsing experience.
Necessary Always Enabled
Necessary cookies are absolutely essential for the website to function properly. These cookies ensure basic functionalities and security features of the website, anonymously.
Functional
Functional cookies help to perform certain functionalities like sharing the content of the website on social media platforms, collect feedbacks, and other third-party features.
Performance
Performance cookies are used to understand and analyze the key performance indexes of the website which helps in delivering a better user experience for the visitors.
Analytics
Analytical cookies are used to understand how visitors interact with the website. These cookies help provide information on metrics the number of visitors, bounce rate, traffic source, etc.
Advertisement
Advertisement cookies are used to provide visitors with relevant ads and marketing campaigns. These cookies track visitors across websites and collect information to provide customized ads.
Others
Other uncategorized cookies are those that are being analyzed and have not been classified into a category as yet.
SAVE & ACCEPT